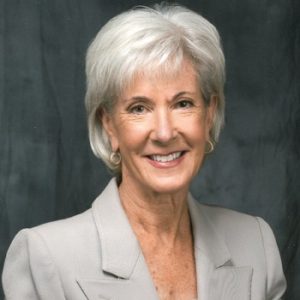 Kathleen Sebelius is an inaugural member of DRK’s Strategic Advisory Board to provide critical insights and expertise on the challenges facing our global society today, and to help the DRK board and the senior management team align its efforts to support our portfolio entrepreneurs as they tackle some of the world’s most complex problems.

Kathleen Sebelius is one of America’s foremost experts on national and global health issues, human services, and executive leadership. From April 2009 through June 2014, Sebelius served in President Barack Obama’s Cabinet as the 21st Secretary of the Department of Health and Human Services, where she worked to pass and implement the Affordable Care Act. At HHS, Sebelius managed 11 operating agencies, 90,000 employees in 50 countries around the world, and a $1 trillion budget. Forbes named Sebelius one of the 100 most powerful women in the world.

Having served as Governor of Kansas from 2003 to 2009, Sebelius is the only daughter of a governor to be elected governor in American history; her late father, John Gilligan, was Governor of Ohio. Time magazine named her one of America’s Top Five Governors. Previous elected offices include two terms as the Kansas insurance commissioner and four terms in the Kansas Legislature.
Currently, as CEO of Sebelius Resources LLC, Sebelius provides strategic advice to companies, investors, and non-profit organizations.
Sebelius serves on the boards of directors of Dermira, Devoted Health, Exact Sciences, Grand Rounds, Humacyte, the Kaiser Family Foundation, and Myovant Sciences. She co-chairs the Aspen Institute Health Strategy Group and serves on advisory boards for the Dole Institute of Politics, Solera Health, Out Leadership, the Estée Lauder Foundation, and the University of Kansas College of Liberal Arts and Sciences.

Sebelius earned a Master of Public Administration degree from the University of Kansas and a Bachelor of Arts degree from Trinity Washington University.